.
Overall Satisfactionc46
Excellent call quality when in good reception 3g area.
Love using skype to talk to one of my freinds in germany.
Both the video quality and sound output is really impressive.
Video quality is poor and crashes frequently.
Skype good to meet video cal all family members.
A way to communicate from long distances thanks skype.
Thanks Skype for your app that doesn't work.
Best thing to keep contact with the loved ones.
now I cannot video call loved ones.
Can't sign in plus to big needs app to SD.
A very best software for communication between friends.
Fun & Engagingc68
Skype is awesome and a good way to comunicate.
I think this Skype is awesome.
My other half hears me clear even when using the loudspeaker in.
Family Friendlyc87
Best I can talk to my family and freinds and my husband.
With Skype I can talk to my family in different states.
Is so easy to see family friends and more.
Family friends.
Social Aspectsc54
easy/free way to keep in touch with long distance boyfriend.
The best and free way to keep in touch with our loved ones.
Allows me to keep in touch with friends and family around the world.
This is an amazing app to keep in touch with friends and family.
I'm glad that able to chat with my friends now with video.
I use it to chat with my friends and it works seamlessly.
Fuk this I cant video chat with my friends on my samsung gem.
Production Valuesc42
The new tablet interface is AWESOME.
Loving the new tablet interface.
Reliabilityc28
Work on galaxy s 2.
you have to factory reset your phone.
Security & Privacyc30
get a Microsoft account.
Can you add option to save password.
Doesn't save password too difficult for something that should be simple.
Updates & Supportc21
At present unable to use conference call function in android version.
very nice this updating Skype version.
Batteryc40
Buts eats battery in standby.
With the new update I'm quite impressed with the battery usage.
Battery usage ap shows Skype drained it fast.
Works reasonably well most of the times. found in 7 reviews
Amazing way for staying in touch with anyone recently rate it 5 star. found in 14 reviews
Great skype interface with skype to skype free calls. found in 51 reviews
cool cool cool cool cool cool cool. found in 7 reviews
Is verry nice we can get a video call. found in 12 reviews
Would give 5 if had video chat for HTC EVO. found in 96 reviews
Better then before but needs video calling on the atrix. found in 262 reviews
Unable to sign in but the user and pass are true. found in 746 reviews
Please add video chat support for Droid 2 Global and Droid Incredible. found in 76 reviews
Works great but pointless without video chat. found in 123 reviews
3 gingerbread support for htc desire and very buggy. found in 96 reviews
Still no video calling on the galaxy nexus. found in 72 reviews
Cant change my profile picture and my contactsbprofile picture i cant see either. found in 138 reviews
Needs video chat and access over the carrier network. found in 251 reviews
Doesn't sync properly with my desktop version either -- profile pictures missing. found in 151 reviews
need improvement some time i cant login it shows unable to login. found in 568 reviews
Sad that it doesn't support video chat for video capable phones. found in 86 reviews
Video support cannot see or use video feature. found in 189 reviews
Skype freezes during calls after the update I installed yesterday. found in 143 reviews
Not letting me make video calls and constantly freezing. found in 3174 reviews
STILL NO VIDEO CHAT FOR HTC MYTOUCH 4G. found in 2014 reviews
Would be 5 stars but DESPERATELY needs Move to SD Card. found in 302 reviews
We all have a video cam that is useless without video chat. found in 123 reviews
But its difficult to imagine skype without video support. found in 140 reviews
Needs front facing camera please update then ill give higher rating. found in 328 reviews
There is no option for video calling for the HTC EVO 4G. found in 3215 reviews
Video quality is poor and crashes frequently. found in 262 reviews
I like it but with the new update i cant make video calls. found in 3174 reviews
but BADLY needs video calling support on Galaxy S2. found in 262 reviews
When ever I try to call someone skype automatically crashes :/. found in 584 reviews
Dont download if u have samsung epic 4g. found in 260 reviews
Skype is barely working on my Samsung galaxy s2. found in 285 reviews
Pretty useless unless you're using Skype to Skype to another country. found in 705 reviews
Video chat wont work on the mytouch 4g. found in 2014 reviews
I can't make calls or receive them anymore. found in 265 reviews
Unable to Sign In even when everything is correct. found in 746 reviews
Samsung Galaxy note II trying to connect with Samsung Galaxy S3. found in 236 reviews
Can't even log in without it saying " unable to login ". found in 568 reviews
Needs Video Chat you've keep us waiting long enough. found in 251 reviews
Now I can make voice calls but I cannot RECEIVE anything. found in 442 reviews
Doesn't make video calls and says its free but it's not. found in 3174 reviews
Back camera defeats the video conversation purpose. found in 277 reviews
Its entirely too massive to no need able to move to sd card. found in 302 reviews
The call quality is horrendous and drops constantly. found in 452 reviews
The Skype is now available for for Android owners. The application is supporting English language. It weighs in at only 10MB to download. The new Skype app version Varieswithdevice has been updated on 2014-11-03. The Apple Store includes a very useful feature that will check if your device and iOS version are both compatible with the app. Most iPhone and iPad are compatible. Here is the app`s compatibility information: view Wi-Fi state , full Internet access , view network state ,
Bottom Line: For more information about Skype check developer Skype `s website : http://www.skype.com 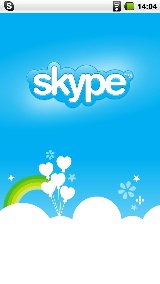 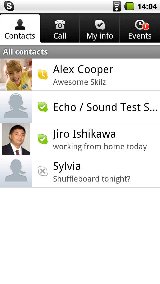 This app is popular with:
long distance relationships