mvilla , brings Fenix for Twitter with a number of new features along with the usual bug fixes. Fenix for Twitter apps has been update to version 1.0 with several major changes and improvements. Apps release that improves performance, provides several new options.
HIGHLIGHTS

.
Overall Satisfactionc89
this app is one of the best twitter apps on android.
This is definitely one of the best Twitter clients I have used to date.
and maybe iPhone emoji support and definitely GIF support.
No gif support.
Fenix is even better than Tweetbot.
Best replacement for falcon pro.
Better than plume.
I hope this gets resolved soon because I love this app.
Fun & Engagingc82
awesome twitter client.
Awesome design tough choice between Fenix and Talon.
Usefulnessc92
Everything the native Twitter app does.
Useful and Beautiful.
Production Valuesc75
I love the many interface customization options.
love the interface customization.
App is polished and consistent.
Ease of Usec77
Simple yet Beautiful.
Reliabilityc59
Security & Privacyc54
Multiple account support.
It made me go back to actually using my twitter account.
I can't login to my Twitter Account.
Updates & Supportc68
Been using it since the preview version.
Batteryc38
Well worth paying for it. found in 3 reviews
Request: option to change font size in widget. found in 5 reviews
I have used nearly every Twitter app on the market and so far. found in 6 reviews
Everything about the design and function of this app is just perfect. found in 8 reviews
Best Twitter client on Android with great developer. found in 432 reviews
enjoyable to use app has made twitter itself much more enjoyable. found in 2 reviews
This is by far the best 3rd party Twitter app on the Playstore. found in 2 reviews
By far my favorite twitter client on any platform. found in 2 reviews
but after last update it just doesn't refresh timeline. found in 8 reviews
My only issue is failing to refresh occasionally. found in 26 reviews
your profile picture and unread tweets count is annoying and again. found in 9 reviews
because the apps cant send pictures in direct messages. found in 6 reviews
but now Timeline updates constantly fail to load. found in 1 reviews
5 stars if we can get GIF support Please. found in 23 reviews
Needs some minor improvements. found in 2 reviews
Love the material design but activity section does not work. found in 2 reviews
but the fact that GIFs don't work bothers me. found in 4 reviews
Gif support would be great. found in 23 reviews
You can't post multiple pics at once. found in 3 reviews
but I have to open Fenix to actually update anything. found in 16 reviews
Love this app but needs some basic improvements. found in 2 reviews
but video playback is just terrible no play or pause button. found in 3 reviews
Doesn't matter if tweet marker is on or not. found in 7 reviews
My biggest problem was that tweetmarker never seemed to work properly. found in 11 reviews
Still has to fix reloading of web content on orientation change. found in 7 reviews
it says "cannot update profile ". found in 1 reviews
but that comes with notifications everytime there are new tweets. found in 20 reviews
can't post tweets anymore for some reason. found in 8 reviews
I don't know why it keeps saying "can not connect to twitter ". found in 25 reviews
I can't login to my Twitter Account. found in 4 reviews
No option to change profile pic. found in 4 reviews
Used to work fine now TL is broke. found in 11 reviews
Won't refresh twitter feed and freezes. found in 3 reviews
Everytime I try to post. found in 11 reviews
the "pull up to refresh " feature is broken. found in 26 reviews
Since last update I can't do manual refresh. found in 5 reviews
Hope the developer updates the app to fix this major issue. found in 7 reviews
Unable to post tweets. found in 8 reviews
The Fenix for Twitter is now available for $2.49 for Android owners. The application is designed for use in English language. It weighs in at only 10MB to download. The new Fenix for Twitter app version 1.0 has been updated on 2014-04-16. For ensuring consistency with the device you should take into account the following app compatibility information: 4.0 and up
Bottom Line: For more information about Fenix for Twitter check developer mvilla`s website : http://mvilla.it/fenix

Fenix brings you a fresh Twitter experience for your Android smartphone and tablet.Tired of the same old Twitter apps? Give Fenix a try and you won`t go back Don`t miss any of your account activities. ... 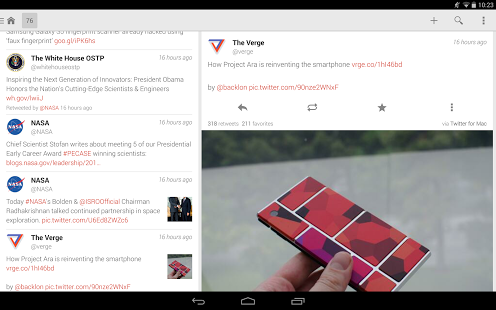 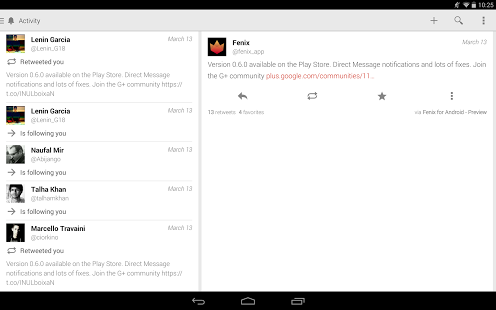 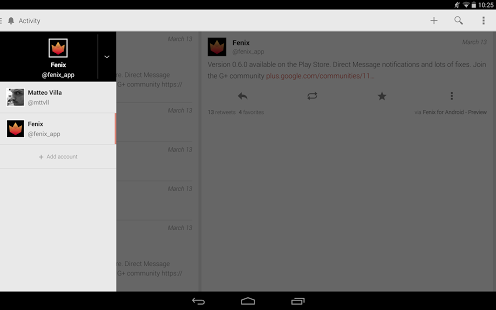 This app is popular with:
power users