.
Overall Satisfactionc50
Amazing app and great call quality over a reliable internet connection.
Voice quality was satisfactory and sounds just like a telephone.
Thanks google you wish my coment to be real.
Much better than Skype or anything else we've tried.
Fun & Engagingc76
I tested the new hangouts app and everything works awesomely.
Works awesomely.
Awesome quality.
Reliabilityc28
google please fix this.
Security & Privacyc55
Google voice or a google voice account is not required.
Perfect app to use with my Google voice account.
The only requirement is that you have a gmail account.
Updates & Supportc24
or the Android version.
Batteryc29
I love this now I get to talk to my friends. found in 7 reviews
Now I dont have to worry about using my 100 minutes. found in 6 reviews
Its really goos it lets me call long distance for free. found in 3 reviews
Very good for a first release. found in 3 reviews
But the ability to place calls to North America is brilliant. found in 6 reviews
Good quality calls to mobiles and the pricing is reasonable. found in 5 reviews
So far I have had crystal clear calls even on marginal connections. found in 9 reviews
Hang outs dialer is the best thing phone app. found in 11 reviews
its easier for me to call my friends overseas cheaply. found in 9 reviews
Google Voice integration that is long overdue. found in 6 reviews
The button to add credit does nothing on my Nexus 5. found in 19 reviews
Needs incoming call support and regular phone dialer replacement. found in 35 reviews
Cannot hit dial pad or select anything during call. found in 23 reviews
Ring Hangouts for incoming phone calls keeps resetting. found in 116 reviews
This does not integrate as default dialer for phone numbers. found in 64 reviews
My voice is extremely muffled so no one can hear me properly. found in 11 reviews
Why google want us to install two apps. found in 11 reviews
Call log should also sync with native dialer call log. found in 13 reviews
I am giving 4 because call disconnects sometime during call. found in 25 reviews
Force closes hangouts when I try to make a call. found in 235 reviews
but each time I want to make a call it crashes and exits out. found in 235 reviews
The one major problem is that your number is unknown. found in 3 reviews
When we don't our caller ID shows up as unknown. found in 50 reviews
Cant hear the other person clearly to much static. found in 9 reviews
No dial tone and ring tone while calling phones. found in 7 reviews
Please add ring tone choice for incoming voice call. found in 12 reviews
I can't install Google hangouts 2. found in 42 reviews
I can't dial 911 so this can't really replace stock dialer. found in 40 reviews
Every time I try to make a call I get a message saying "Unfortunately. found in 235 reviews
Poor voice quality : Voice gets cut down very frequently. found in 52 reviews
Incoming call settings keep reverting to default. found in 35 reviews
App crashes when i try to call a number from contacts. found in 37 reviews
Fix the annoying bug that unchecks receive calls. found in 72 reviews
Ring on incoming calls keeps reverting to unchecked. found in 116 reviews
the regular Hangouts app crashes when the Dialer app is downloaded. found in 49 reviews
No way to turn the default dialer off to avoid this. found in 64 reviews
Text messages are fine but when I place a call it rings. found in 35 reviews
but the people I call always complain about poor call quality. found in 134 reviews
Outgoing call quality is just horrible. found in 42 reviews
Try to make call via wireless network and it crashes. found in 47 reviews
No option to change caller ID like you have in Skype. found in 50 reviews
If you are Android owner,you now can download Hangouts Dialer for free from Google Play. The application is designed for use in English language. It weighs in at only 10MB to download. It is highly advisable to have the latest app version installed so that you don`t miss out on the fresh new features and improvements. The current app version 0.1.74972069 has been released on 2014-09-10. The Apple Store includes a very useful feature that will check if your device and iOS version are both compatible with the app. Most iPhone and iPad are compatible. Here is the app`s compatibility information: 4.0.3 and up
Bottom Line: For more information about Hangouts Dialer check developer Google Inc.`s website : https://support.google.com/hangouts/?p%3Dandroidhelp

Now call any phone number in the world from your Hangouts app using your data connection. Download and install the Hangouts Dialer to activate phone calling functionality in the Hangouts app. After installation, you can ... 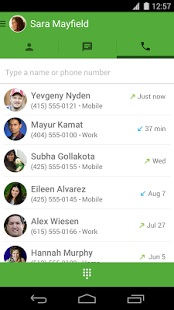 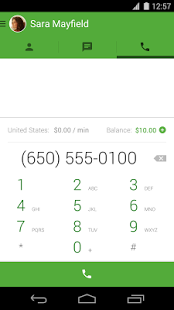 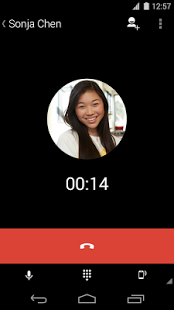 This app is popular with:
travelers