.
Overall Satisfactionc70
Still the best browser out there for me.
Best browser but crashes when copying url every time.
Best browser for android afterall father of android is google.
It was my favorite browser for Android until all these issues.
Adobe is dropping flash support for all mobile applications.
No flash support while the latest firefox supports flash.
Beside that I love using Chrome Browser on my Android Phone.
I love Google Chrome more than Microsoft Internet Explorer for internet browsing.
I normally love google chrome but this is stupid.
My chrome the best browser thanks Google play.
Thanks Google for screwing us custom ROM users over.
nice browsing and downloading speed and also better than Firefox browser.
Google exceeds in creating the best search engine available.
The best search website but the dumbest search app.
Fun & Engagingc67
Otherwise it is an awesome browser in terms of functionality.
Google chrome is awesome it works faster and better than other browsers.
Social Aspectsc16
Ease of Usec92
Fast Simple and user friendly.
Fast simple and light.
Reliabilityc25
I did a factory reset and re-installed chrom.
I've noticed that Chrome is MUCH slower than the stock browser.
Security & Privacyc30
The browser is asking for sync password.
I know I'm putting in the correct password to my account.
I can through my gmail account sync my bookmarks.
Updates & Supportc16
Is there a way of bringing extensions to the Android version.
Swipe left to go back to previous page AND reader view.
Batteryc40
so much battery usage and always creating a humongous cache.
The browser would not be using that much battery.
its simple and cool browser. found in 18 reviews
This is the best web browser by far for android. found in 96 reviews
Google exceeds in creating the best search engine available. found in 24 reviews
Slow than browser Google version in nexus device. found in 89 reviews
It is now super fast and fluid to use. found in 16 reviews
Opening sites like Huffpo and CNN is just blazing fast. found in 31 reviews
It does not play flash videos and does not support flash. found in 45 reviews
Just needs flash support and hideable address bar for 5 stars. found in 537 reviews
It should only open existing tabs n should not open new tabs. found in 676 reviews
Can't open links from Facebook anymore since update. found in 84 reviews
No exit button or way to clear history at exit. found in 184 reviews
It loads web pages quickly but still doesn't support flash. found in 174 reviews
Still relatively slow page loading than other browsers. found in 74 reviews
This update introduced a flickering bug when I have multiple tabs open. found in 263 reviews
It doesn't support flash player solve this problem i'll give you 5star. found in 174 reviews
Always load pages repetitively if i switch between tabs. found in 174 reviews
Would love desktop user agent option and flash support. found in 116 reviews
Flash player not working for nseindia Web page. found in 343 reviews
Since the new update Chrome keeps shutting itself down. found in 248 reviews
Sometimes I open Chrome with half the screen BLACK. found in 191 reviews
Won't open tabs the first time I link to them. found in 239 reviews
Please cosider providing the move to SD card option. found in 121 reviews
please introduce capability to move to SD card in d near future. found in 121 reviews
Chrome crashes whenever I copy something from it. found in 150 reviews
After recent update chrome is crashing many times. found in 248 reviews
Unable to Switch between Tabs and no gestures. found in 446 reviews
Would prefer if the address bar could hide / unhide. found in 731 reviews
Freezes my Moto Razor and HTC One M8. found in 303 reviews
The new update sucks and broke the internet. found in 308 reviews
Deleted my open tabs and it's useless right now. found in 239 reviews
Please return back switching between tabs by swaping it is now sucks. found in 309 reviews
Great like that PC Desktop version but crashes very frequently. found in 383 reviews
No flash support while the latest firefox supports flash. found in 537 reviews
My galaxy note isnt eveb compatible which realli sux. found in 369 reviews
Nexus 7 2013 reboots randomly when using chrome. found in 407 reviews
Unless this gets fixed and fast I'll be reverting back to firefox. found in 230 reviews
" I have stopped using Chrome until this issue is fixed. found in 355 reviews
Problems with security updates on my samsung galaxy s3 since this update. found in 238 reviews
until you got rid of swipe to change tabs in the lollipop update. found in 341 reviews
The newest update let's me " open new tabs. found in 676 reviews
Switching between tabs I'd almost impossible now. found in 309 reviews
After updating the chrome browser I can no swipe between tabs. found in 320 reviews
Still has no flash player capabilities on Samsung s4. found in 343 reviews
If you are Android owner,you now can download Chrome Beta for free from Google Play. The application is designed for use in English language. It weighs in at only 10MB to download. It is highly advisable to have the latest app version installed so that you don`t miss out on the fresh new features and improvements. The current app version Varieswithdevice has been released on 2014-01-16. For ensuring consistency with the device you should take into account the following app compatibility information: 4.0 and up

The speed and simplicity of Chrome, now on your Android phone and tablet.Browse fast on your Android smartphone or tablet, and bring your personalized Chrome experience with you anywhere you go. Chrome for Android is ... 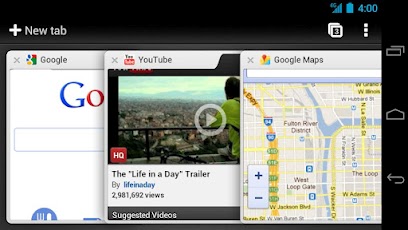