.
Overall Satisfactionc53
Definitely better than Gmail app for Android.
Thanks Microsoft for a great app.
Way better than the stock Samsung app for exchange mail.
Thanks Bill.
Fun & Engagingc26
Usefulnessc32
Essential features that you need to work on.
Snappy but missing a very essential features.
Ease of Usec38
counter intuitive 2.
Finally easy setup of multiple accounts.
easy setup and rapid access.
Reliabilityc24
Ads not Intrusivec28
Security & Privacyc24
best email client for outlook account.
A must for BYOD phones and exchange email.
Updates & Supportc31
I understand this is a preview version.
Using android version.
great customer service.
Batteryc10
Mail delete option not workingon home screen of the app. found in 10 reviews
It's a work in progress for a reason. found in 2 reviews
Other than that it is nice and cool. found in 3 reviews
Would love to see more sync and customization options. found in 6 reviews
Like the app and unified inbox. found in 4 reviews
Overall a very nice email program. found in 6 reviews
Can't expand some sub folders without expanding all of them. found in 37 reviews
I made a request to add an empty trash option last week. found in 57 reviews
Can't download attachments that are attached inline. found in 23 reviews
can't attach files from the phone other than photos. found in 68 reviews
doesn't have a option to empty trash folder. found in 24 reviews
and the "undo" pop up everytime i delete emails is annoying. found in 38 reviews
Also doesn't integrate with google calendar which is a no-no. found in 33 reviews
its just missing the junk mail folder. found in 30 reviews
Cannot determine how to eliminate conversation view. found in 51 reviews
Junk folder now missing and 3 Hotmail folders after update. found in 46 reviews
doesn't mark read emails and doesn't send emails consistently. found in 46 reviews
but I'm seriously missing Notifications for new mails. found in 55 reviews
I don't want to have to sign in twice a day. found in 36 reviews
Doesn't sync contacts and lacking some functionality. found in 40 reviews
calendar cannot show as monthly view. found in 10 reviews
Please provide one option to attach files from sd card or Phone Storage. found in 84 reviews
Many bugs have been fixed specially empty the trash folder. found in 61 reviews
Permanently delete email doesn't work from trash folder. found in 19 reviews
Unable to configure and unable to Uninstall. found in 34 reviews
Never had any issues connecting with Office 365 Account. found in 49 reviews
Unfortunately this app removed the support for Office 365. found in 49 reviews
still removing all my email accounts needs fixing asap. found in 94 reviews
No new mails after getting notified of new mail. found in 55 reviews
Also an empty trash option would be nice as well. found in 57 reviews
have deleted it and using generic email app. found in 315 reviews
Triggers hotmail account lock due to 'suspicious activity' lmao. found in 58 reviews
I can use gmail app create hotmail account easily without issue. found in 150 reviews
uninstalled after being asked to setup from scratch again. found in 89 reviews
This is quite possibly the worst email client I've ever seen. found in 110 reviews
Even after this latest update STILL can't send emails. found in 46 reviews
and why dont I get any notifications for new emails. found in 86 reviews
It fails to search the exchange server for older emails. found in 49 reviews
Many apps out there doesn't enforce encryption & Pin for exchange accounts. found in 70 reviews
My original outlook app stopped working and refused to connect. found in 177 reviews
Doesn't enable syncing outlook account with other calendar or contacts apps. found in 57 reviews
and most importantly can't attach files from my local device. found in 68 reviews
There is no way to attach files from your phone. found in 84 reviews
The Microsoft Outlook Preview is now available as a free download on Google Play for Android owners. The application is supporting English language. It weighs in at only 10MB to download. The new Microsoft Outlook Preview app version 1.0.1 has been updated on 2015-01-28. For ensuring consistency with the device you should take into account the following app compatibility information: 4.0 and up
Bottom Line: For more information about Microsoft Outlook Preview check developer Microsoft Corporation`s website : http://aka.ms/outlookFAQ

The official Microsoft Outlook app for Android phones and tablets. Outlook is a free email app that helps you get more done from anywhere with one unified view of your email, calendar, contacts, and attachments. ... 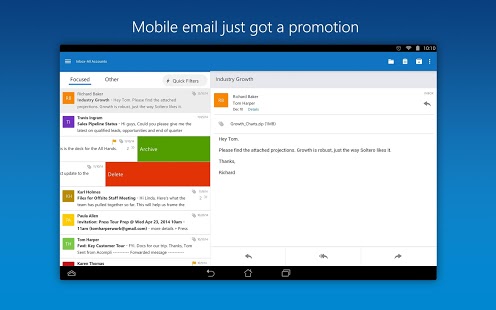 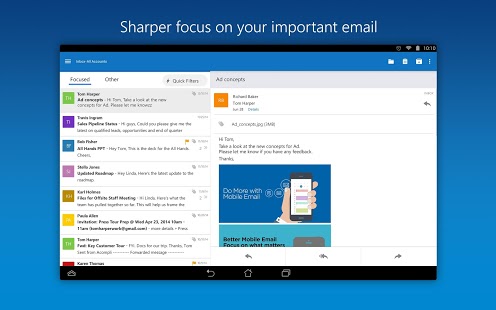 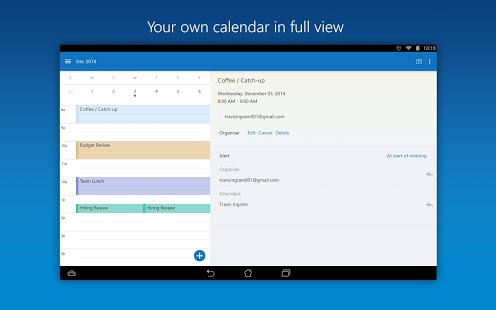 This app is popular with:
exchange users