.
Overall Satisfactionc53
Yahoo Best Email Service Ever What More Needs 2B Said.
Haven't seen a more pathetic email service provider.
Thanks Yahoo for being 100% reliable in your service.
Thanks Yahoo for ruining it.
I find it really handy & better than Gmail app in some features.
Work Better than the stock email app and so many themes to choose from.
Works for any Yahoo need.
Easy love the themes so much better then getting online.
Love the themes but they're a bit buggy.
Fun & Engagingc12
Usefulnessc28
Production Valuesc44
The Web interface has gone very wrong since last changes.
The app is lot better than their web interface.
Ease of Usec35
GooD and simple app.
Simple App to use.
this is just unacceptable for such a simple app.
Reliabilityc24
Always there to retrieve reply or forward.
Ads not Intrusivec26
Security & Privacyc33
Does what a yahoo mail account does just easier to access.
and its is good for security point of view as well.
Updates & Supportc15
I felt gud now as compared to previous version.
Provides the ultimate customer service for all the users needs.
I like Android version than Web version.
So after an Android version update and that app " disappeared".
Batteryc24
Bit of a battery drainer.
The only problem I have is it kills my battery fast.
Takes a long time to sync and open emails. found in 115 reviews
Wont push new emails automatically to push reliability. found in 616 reviews
Can't open attachments and sideways/horizontal scroll when viewing an email is. found in 77 reviews
Sometimes it gets stuck while refreshing and won't load new messages. found in 266 reviews
you cant open attachments & you cant choose your own ringtone notification. found in 77 reviews
Now the Spam folder is constantly refreshing. found in 199 reviews
Unable to receive and download emails ever since last update. found in 95 reviews
Still doesn't notify me plus now obnoxious ads. found in 56 reviews
Needs to the option to move to SD card. found in 135 reviews
Much improved but really needs " move to SD card " enabled for Froyo. found in 135 reviews
Does not load messages without refreshing - Samsung Fascinate. found in 77 reviews
After the update i can't delete emails or mark them as read. found in 296 reviews
Its really glitchy and sometimes when I try to open an email it force. found in 99 reviews
Works well enough but needs SD card support. found in 175 reviews
New emails don't show up even after repeated refreshing. found in 73 reviews
You can't delete messages from the inbox folder. found in 167 reviews
Doesn't list new mails even on repeated refresh. found in 799 reviews
It's good but please please please make a logout button. found in 76 reviews
Sends multiple emails which is embarrassing and annoying to friends. found in 200 reviews
Wish there was a way to delete multiple messages at once. found in 137 reviews
Also have alot of trouble replying to email. found in 141 reviews
I now can't delete emails or move them to other folders. found in 296 reviews
The app sucks when it comes to downloading attachments. found in 148 reviews
No access to sd card to attach files. found in 175 reviews
Can't load new emails even with latest update. found in 616 reviews
Can no longer send emails or view mail in folders. found in 186 reviews
You know what Yahoo Email lacks compare to gmail. found in 314 reviews
does not load new messages half the time and have. found in 266 reviews
I have decided to switch to Gmail if this problem isn't fixed. found in 305 reviews
Way too many unnecessary permissions for a simple email client. found in 137 reviews
I still cannot delete multiple emails at a time consistently. found in 200 reviews
Can't check external mail accounts like the mobile web version. found in 140 reviews
Doesn't sync all emails on Yahoo business email accounts properly. found in 191 reviews
After installing all my yahoo accounts were compromised Uminstalled but still. found in 326 reviews
The new update doesn't differentiate the read mails and unread emails. found in 183 reviews
Receives new email notifications but wont load in my inbox. found in 189 reviews
Plus the spam folder just won't delete the spam. found in 199 reviews
The Yahoo! Mail for Android is now available for for Android owners. The application is designed for use in English language. It weighs in at only 10MB to download. It is highly advisable to have the latest app version installed so that you don`t miss out on the fresh new features and improvements. The current app version 3.0.18 has been released on 2014-01-8. The Apple Store includes a very useful feature that will check if your device and iOS version are both compatible with the app. Most iPhone and iPad are compatible. Here is the app`s compatibility information: view network state , full Internet access , view network state ,
Bottom Line: For more information about Yahoo! Mail for Android check developer Yahoo! Inc. `s website : http://mobile.yahoo.com/mail/android 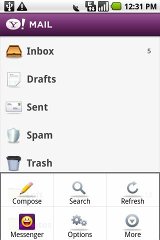 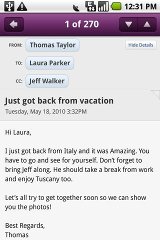