.
Overall Satisfactionc50
Works great for me on my moto e thanks HP.
No thanks hp.
Only suggestion add more print quality settings.
Can't change print quality setting.
to allow this.
Great app great job HP.
Would like image quality options and ability to print docs.
Hooked right into my wireless network.
Fun & Engagingc69
Usefulnessc48
I can print everything that I want.
Ease of Usec50
Easy setup and as reliable as printing from my desktop.
It was super easy to use and I now use it everyday.
Simple app that does exactly what it says.
congrats to hp for making such a simple app completely rubbish.
Really easy to set up and use works a treat thanks hp.
Thank You - Easy and Free HP App.
Great for quick and easy printing of photos.
Security & Privacyc26
Please enable to print "pdf file" which are password protected.
even password protected ones.
I had it with my Nokia X6 and now my MT4G. found in 2 reviews
Print wirelessly from your device instantly. found in 9 reviews
Great app installed on Galaxy S2 automatically detected Deskjet 3050 Printer. found in 44 reviews
Downloaded photo from the Picasa. found in 2 reviews
That's a bit excessive. found in 2 reviews
Hooked right into my wireless network. found in 2 reviews
it found my HP F4580 wireless printer. found in 4 reviews
Learn how to spell before you comment. found in 2 reviews
HP eprint Home & Office. found in 22 reviews
Wish it did more then pictures and did it over mobile network. found in 5 reviews
Installs very fast on DesireHD. found in 2 reviews
Would like it to intergrate with Google cloud print. found in 2 reviews
This is one of the coolest things I have seen. found in 2 reviews
especially considering there's. found in 2 reviews
Would like to see more control. found in 2 reviews
I have a Samsung Galaxy S5 and a HP envy printer. found in 25 reviews
auto discovered my printer quickly. found in 3 reviews
Lets you edit pictures before printing. found in 3 reviews
Very handy tool :. found in 3 reviews
Please add option to print password protected pdf file. found in 10 reviews
Please move to SD card and allow doc printing. found in 90 reviews
After update shows error jammed carraige upon every single print job. found in 64 reviews
Missing the scan feature that is only on iOS devices. found in 9 reviews
nor to adjust print settings for quality yet. found in 11 reviews
Now if we could print emails and docs it would be amazing. found in 48 reviews
Ability to print documents would be very helpful too. found in 54 reviews
But can't be moved to SD card and it occupies almost 10MB. found in 75 reviews
I can't print web pages because they are too big. found in 49 reviews
Good printer app but can't print emails from popular email clients. found in 48 reviews
Very useful app but misses black ink only prints. found in 14 reviews
but I frequently need to print web pages and can't. found in 42 reviews
Want to register my id but server totally not responding. found in 30 reviews
but should show up when you try to print a document. found in 44 reviews
because it's too big and can't move to SD card. found in 75 reviews
it will not read the external SD card in the phone. found in 13 reviews
Easy but couldn'nt see an option to print in black and white. found in 39 reviews
just one star missing as still unable to print directly via apps. found in 25 reviews
Worked perfectly with my new HP Photosmart Plus printer until recent update. found in 57 reviews
Now I can't print to HP printers that worked perfectly before. found in 399 reviews
Needs the ability to manually locate network printers. found in 68 reviews
Using phone to print to this printer is a waste of time. found in 59 reviews
And I can't print directly from my Adobe documents. found in 56 reviews
I can't print to my slightly older HP wifi printer. found in 95 reviews
Why can't I just print directly from my phone to my printer using WiFi. found in 57 reviews
Won't connect to my HP Photosmart printer and my e-print account. found in 99 reviews
it doesn't find documents I want to print on my phone. found in 88 reviews
Will not identify files on external sd card at all. found in 90 reviews
And I was still unable to wirelessly print from my phone. found in 52 reviews
Used to be able to print with no reader problem though were really slow. found in 84 reviews
Lacks the ability to print to local network printers. found in 54 reviews
Good but Can't move to sd card. found in 75 reviews
Taking hp printer back to get refund on money. found in 371 reviews
Why can't I print to my HP color laser printer. found in 62 reviews
I can't believe this requires activation for sending some print jobs. found in 64 reviews
And huge app w/ no ability to move to SD sucking up internal memory. found in 78 reviews
If you are Android owner,you now can download HP iPrint Photo for from Google Play. The application is supporting English language. It weighs in at only 10MB to download. The new HP iPrint Photo app version 2.3.1 has been updated on 2014-11-30. For ensuring consistency with the device you should take into account the following app compatibility information: view network state , full Internet access , view Wi-Fi state ,
Bottom Line: For more information about HP iPrint Photo check developer Hewlett Packard Development Company, L.P. `s website : http://www.hp.com/go/iprintphotoforandroid 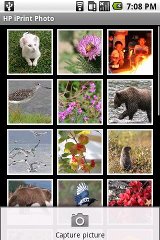 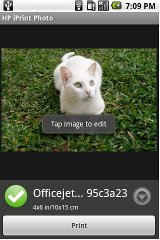