.
Overall Satisfactionc51
Hopefully Google Voice integration will be coming soon.
clear clarity superb video quality on my Samsung Galaxy S4.
CAN reach my friends who are away from me Thanks Google.
Thanks Google for giving meaningless updates which killed the app performance.
The video call on it is also leagues better than Skype.
the call quality is better than Skype and louder than Facebook.
Needs a dark theme even before I look at this.
this app is far much better than stock Messaging app.
I love this app i love the emojis.
Fun & Engagingc49
Usefulnessc33
I generally like Hangouts with its integration with everything Google.
Keeping everything Google on my s3.
Social Aspectsc51
Finally a way to keep in touch with people across multiple platforms.
Great way to keep in touch over multiple contract groups in one app.
Easy to use and efficient app to chat with friends and family.
I can video chat with friends and soo much better than talk.
Social media communication tool kit.
gd for social media purposes&.
I love this app and wish more people used it.
wish more people were actively using it.
Ease of Usec17
Reliabilityc33
just need those new bugs to be ironed out.
Security & Privacyc42
From showing their gmail account to their g+ account etc.
Easy to use and web accessible from my gmail account.
Updates & Supportc34
Please hurry and add this feature to the android version.
When will the android version offer voice calls.
Batteryc18
Battery drainer.
I love this app and wish more people used it. found in 12 reviews
Best cross platform messaging app bar none. found in 51 reviews
Love the SMS MMS integration. found in 242 reviews
Easy to use and efficient app to chat with friends and family. found in 24 reviews
until i realized group texts did not work for me. found in 129 reviews
Needed dual sim support with auto sim selection for specific numbers. found in 208 reviews
Often send sms it won't send properly. found in 274 reviews
Doesn't send mms messages and sometimes SMS messages. found in 180 reviews
Mms doesn't work well still/contacts messed up. found in 56 reviews
Still cant send and receive picture messages on my galaxy s4. found in 134 reviews
I can't send pictures on my Nexus 5 for some reason. found in 125 reviews
You cannot see who is online and the friends list is crap. found in 199 reviews
Love the sms feature but doesn't download mms messages. found in 141 reviews
im not satisfied as the lastest updated version dont send group sms. found in 130 reviews
Great app but cant see who is online Please fix this. found in 199 reviews
I love this app but I still cannot send or receive MMS messages. found in 335 reviews
I have been unable to receive group MMS pictures since this update. found in 182 reviews
Unable to send files other then pictures thru hangouts. found in 57 reviews
Sometimes it doesn't notify new messages as well. found in 56 reviews
Annoyed without enter key Cant go to nxt line. found in 117 reviews
And also MMS never works I can't send or receive pictures /video kinda sucks. found in 219 reviews
Cant send photo or video attachments like Samsung app. found in 65 reviews
Contact photos show hangouts/ nothing instead of contact pics. found in 82 reviews
Love the app just needs a pop up notification for new messages. found in 150 reviews
Seems to drop random sms messages making it unreliable. found in 253 reviews
Video calls not working on S3 and freezes phone. found in 914 reviews
Why is there no dual sim support with the Text messaging. found in 208 reviews
Video chat seriously broken in the latest release. found in 611 reviews
and I get an error that Google hangouts encountered an error. found in 199 reviews
Now 1 since now I can't seem to send or receive MMS messages. found in 335 reviews
I can't even see who is online on my list view anymore. found in 199 reviews
My hangouts keep saying I cant connect to google. found in 212 reviews
@googledevs: Please allow sms integration in gingerbread devices. found in 358 reviews
Needs to feed through Facebook like default sms app. found in 602 reviews
SMS feature not working for dual SIM mobile. found in 209 reviews
Google just made Google Talk somehow more useless. found in 534 reviews
Unable to receive MMS from anyone even MetroPCS user. found in 182 reviews
After last update text messages doesnt work as they should. found in 321 reviews
also u cant see who is online or offline sucks. found in 199 reviews
Still cannot make voice calls with the Android OS come on Google. found in 263 reviews
rendering its Google Voice integration almost useless for incoming calls. found in 714 reviews
this error is only in supporting dual sim phones. found in 211 reviews
Can't send or receive pictures or video no big texts either just doesn't work. found in 219 reviews
Cannot send SMS after pasting a phone number. found in 274 reviews
If you are Android owner,you now can download Hangouts (replaces Talk) for free from Google Play. The application is designed for use in English language. It weighs in at only 10MB to download. The new Hangouts (replaces Talk) app version 2.0.217 has been updated on 2014-01-8. For ensuring consistency with the device you should take into account the following app compatibility information: 2.3 and up

Hangouts brings one-on-one and group conversations to life with photos, emoji, and video calls for free. Connect with friends across computers, Android and Apple devices. Brought to you by Google. Say more with photos and ... 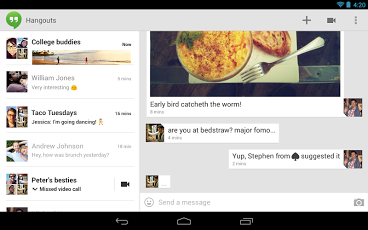 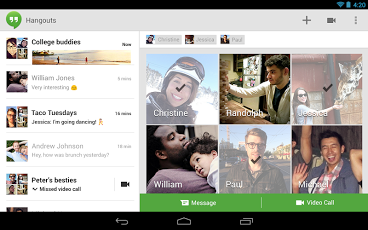 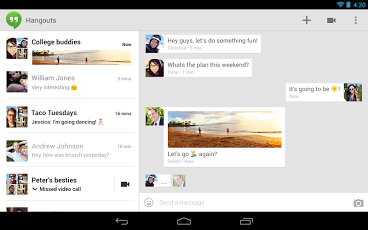 This app is popular with:
singles