.
Overall Satisfactionc53
Great app Gmail is still the best email client in the market.
Annoying and don't belong in my email client.
This mail client is perfectly integrated with drive.
I am moving to another mail client until Google fixes this.
Best Email Service Provided By An Outstanding Company With Great Customer Service.
Your Email service shouldn't FORCE YOU to use The DRIVE.
Thanks Google this update is awesome and programs sooo faster.
Needs pinch to zoom and it'll be perfect.
Works better than yahoo or any other mail service.
Fun & Engagingc64
Love this app Gmail is awesome.
The view of gmail is awesome.
Usefulnessc42
Get everything Google for your droid or tab.
I love everything Google.
Social Aspectsc12
Production Valuesc32
In many senses it's even better than the web interface.
Almost all the functionality of the web interface.
Ease of Usec28
Reliabilityc27
I did a factory reset after trying everything else.
Security & Privacyc39
Bug: links are not clickable in non google mail account.
Is really nice that one can have more than one account.
Updates & Supportc17
I had to switch back to previous version and that is working fine.
the android version.
Batteryc12
or preview of image files attached as in pc version. found in 16 reviews
As of course we have come to expect from Google. found in 13 reviews
Excellent email app to match Google's free email service. found in 17 reviews
We should have the option of signing out. found in 8 reviews
I hope they re add the notification sound setting back on. found in 14 reviews
But it is not possible to empty the trash. found in 67 reviews
Guys PLEASE PLEASE PROVIDE OPTION TO MOVE TO SD CARD. found in 108 reviews
Cant find new messages in conversations when they arrive. found in 224 reviews
but I also wish there was an option to empty the trash folder. found in 67 reviews
I dont get notification on receiving new mails. found in 655 reviews
Latest update killed auto sync and doesn't sync. found in 423 reviews
The conversation view is an inept recipe for disaster. found in 272 reviews
5 stars if there is move to sd card option. found in 108 reviews
Have to delete trash inbox through broswer. found in 100 reviews
Please provide option to attach documents while replying emails. found in 64 reviews
Trash folder shows no connection when connected to good wifi. found in 110 reviews
Please make simple and easy for download attachments. found in 104 reviews
but there's no way to empty the entire folder at once. found in 126 reviews
I can't attach files other than pictures and I can't zoom in. found in 144 reviews
why is there no option to attach files from folders. found in 371 reviews
New emails don't show up even after refreshing. found in 102 reviews
It doesn't notify me of new messages anymore. found in 85 reviews
No longer able to empty trash and spam on my tablet. found in 234 reviews
Google please add the option to turn off conversation view within the application. found in 446 reviews
This gmail app is miserable at formatting html. found in 1306 reviews
it is impossible to delete multiple messages from the home screen. found in 242 reviews
No way to delete multiple emails that I've found so far. found in 243 reviews
I cannot read some new messages within a thread. found in 224 reviews
Conversation view makes this app unusable for business. found in 272 reviews
Why is there no option to attach files while composing and sending mails. found in 371 reviews
The new long-press to select multiple conversations is a step backwards. found in 471 reviews
list unread emails but won't load past Sept since new update. found in 321 reviews
Auto sync has stopped working after the last update. found in 423 reviews
New update sucks it won't even let me open my emails. found in 187 reviews
Now you can't delete emails unless you open it first. found in 315 reviews
The new gmail app won't let me delete any of the trash. found in 188 reviews
The unknown issue with Google play service forever prompts. found in 286 reviews
the app no longer pushes notifications for new emails. found in 783 reviews
I stopped using gmail accounts because of this. found in 265 reviews
I had to delete ALL email accounts and uninstall software. found in 278 reviews
No way to check multiple emails and delete them. found in 291 reviews
If you are Android owner,you now can download Gmail for from Google Play. The application is designed for use in English language. It weighs in at only 10MB to download. The new Gmail app version Varieswithdevice has been updated on 2014-01-10. For ensuring consistency with the device you should take into account the following app compatibility information: view network state , full Internet access ,
More Info: Find more info about Gmail in Google Inc. `s Official Website : http://www.google.com/support/android/bin/topic.py?hl=en&topic=27218

The dedicated Gmail application integrated with Contacts and Android applications. Email pushed automatically to your phone Search all your messages Access synched messages when off line View messages by conversation Multiple Gmail accounts Stars, labels, and ... 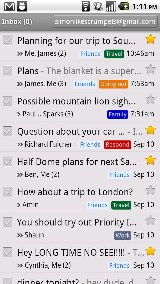 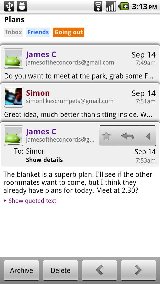