.
Overall Satisfactionc67
This is literally the best music app out there.
Brilliant service with excellent sound quality and selection.
The app is brilliant so much better than Spotify and half the price.
Its got all the music got for music lovers.
Lots of songs and good audio quality.
Great yet can be made better by adding more songs.
thanks deezer team.
Hope it continues to be amazing.
Fun & Engagingc48
Great yet can be made better by adding more songs.
Awesome music streaming app.
Awesome quality.
Usefulnessc29
Reliabilityc44
Security & Privacyc30
Got a free premium account with my orange contract.
I will give 5 stars if no advertisement for premium account.
Loving the EE 4G free account.
want even take my Facebook password.
Updates & Supportc34
The new gui is nice. found in 3 reviews
the new Flow is the last thing i was missing. found in 8 reviews
simply the best streaming music app on the android market. found in 21 reviews
Such an awesome experience. found in 3 reviews
Sleek app and good stations. found in 2 reviews
Cool music application. found in 6 reviews
read before leaving a comment. found in 2 reviews
Also last fm scrobbles after a couple seconds play of something. found in 7 reviews
Talking about easy and classical music application. found in 8 reviews
Music to my ears. found in 5 reviews
similar artists function good for discovering new music. found in 13 reviews
genre etc. found in 6 reviews
Hopefully the Windows desktop version will return soon. found in 7 reviews
Reali itZ Aswm aPp. found in 2 reviews
Wow Last time it was 30 sec previews now it's unlimited :-. found in 2 reviews
A bargain considering I got this with my Orange contract. found in 27 reviews
Amazing app truly gr8 4 music. found in 2 reviews
Been waitng ages fotrt app to become available in uk. found in 3 reviews
Recommendable for music fans x. found in 6 reviews
Deezer works fine until you want to play a song. found in 32 reviews
What's happened to the equaliser now. found in 10 reviews
it would be great if they fixed thier subscribe button. found in 9 reviews
without being prompted to subscribe which I previously did. found in 84 reviews
Slow Unresponsive Force close Takes too much time to load. found in 37 reviews
it says "the server encountered an error ". found in 13 reviews
But you can't play songs offline witch is annoying as hell. found in 33 reviews
Its just stupid about the 15 day trial thats bullshit. found in 34 reviews
but force closes when I try to login with Facebook & the register button disappeared : /. found in 60 reviews
but force closes when I try to login with Facebook & the. found in 59 reviews
Deezer stops playing music and the notification doesn't response. found in 40 reviews
Update sucks lags like crazy and looses data. found in 9 reviews
Occasionally randomly skips songs but ill forgive. found in 14 reviews
I like the app except it stops after one song. found in 67 reviews
Now I can't skip songs on my home screen. found in 27 reviews
Its good though but this needs sorting out. found in 8 reviews
When I tried to sign up it says" coming soon. found in 53 reviews
Lock screen play controls seem to be missing in this version. found in 102 reviews
Because there are many songs which i dont want to listen. found in 317 reviews
Fails to log in very often and it's really annoying. found in 60 reviews
corrupted my sd card. found in 61 reviews
After the update the music player widget has disappeared. found in 52 reviews
Everytime i wanna login with Facebook they can't recognise my Facebook account. found in 64 reviews
I'm seriously considering switching to Spotify sadly. found in 86 reviews
Everything downloaded again and still no access in offline mode. found in 114 reviews
Until i started getting suspicious over the free music. found in 86 reviews
Chromecast support isn't working from my HTC One. found in 90 reviews
Have to subscribe to listen to full songs after trial. found in 50 reviews
You need to subscribe and you have only 30 sec per track. found in 84 reviews
when i searched for a new song play frequently not working. found in 51 reviews
nor listening to 30 seconds of tracks in my hopes. found in 68 reviews
Uninstalling as i wanted to listen to music. found in 159 reviews
Won't let you delete play lists. found in 61 reviews
Ads after one song its more than an song app. found in 67 reviews
New updates lately have made the sound quality so horrible. found in 75 reviews
The Deezer is now available for for Android owners. The application is supporting English language. It weighs in at only 10MB to download. It is highly advisable to have the latest app version installed so that you don`t miss out on the fresh new features and improvements. The current app version Varieswithdevice has been released on 2014-11-03. For ensuring consistency with the device you should take into account the following app compatibility information: full Internet access , view network state , view Wi-Fi state ,
Bottom Line: For more information about Deezer check developer Deezer Mobile `s website : http://www.deezer.com

All the music you want, unlimited, unrestricted Listen for free more than 30 webradios, the SmartRadio and manage your Deezer Account from your Android. By subscribing to Deezer Premium +, you will access to 7 million tracks, ... 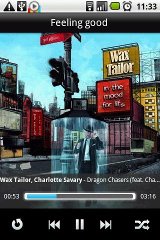 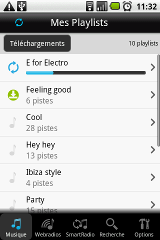 This app is popular with:
music fansmusic lovers