.
Overall Satisfactionc52
Best reader I have ever used.
Best one I've tried.
Works much much better than other apps i've tried.
love how easy it is to use and accurate.
best software for scan barcode.
Fun & Engagingc80
Awesome scanner for QR codes.
They pop up all the time.
Awesome worked first try.
Usefulnessc92
Very good app it scans everything.
Really good saves time an money.
Easy to use and very accurate details of scanned bar code.
It's worked on everything I've tried to scan.
Very useful and accurate.
Its very helpful in knowing about a strange product.
it is usefull apps.
Ease of Usec84
This mess don't work other than to offer to install Amazon.
Easy to use and very accurate details of scanned bar code.
Easy as pie.
Its simple and cool to use.
Easy reliable.
Fantastic easy to use app.
Reliabilityc37
Didn't have any problems with my Samsung Note 3.
I didn't have any problems.
Ads not Intrusivec35
Security & Privacyc32
IT Account Manager.
Batteryc24
Explore the world of q r codes and barcodes with this app. found in 11 reviews
Macht genau das was es soll. found in 14 reviews
Real bar code scanner that actually gives information. found in 216 reviews
Very fast detection almost like a bar code scanner at the shops. found in 180 reviews
Barcode scanner app Awesome and so easy to use. found in 312 reviews
Scans quickly and gives you a link to instantly claim offers. found in 7 reviews
Hooray it works and it's user friendly. found in 12 reviews
The best Barcode reader I have used. found in 83 reviews
Nice on QR codes but fails to scan bar codes. found in 2 reviews
Very annoying ads but otherwise it works well. found in 17 reviews
Way too many adverts. found in 6 reviews
Too many pop ups and gives me camera error. found in 22 reviews
Con: unable to read pr code on ups notice. found in 4 reviews
Ads are a pain hard to get scan lined up. found in 8 reviews
Stopped working and crashed my camera. found in 1 reviews
There are absolutely NO QR/BARCODES in my Contacts/ Call log. found in 2 reviews
The pop up ads get in the way and that is annoying. found in 6 reviews
The ads suck but it works just fine. found in 9 reviews
Just don't expect to scan anything small. found in 63 reviews
Don't force me to rate the app. found in 24 reviews
Works great but ads keep popping up before you can scan. found in 3 reviews
Ad popups and permissions. found in 4 reviews
Great app but ads too intrusive. found in 2 reviews
Does what it says works well ads annoying. found in 5 reviews
Good app but one too many full screen ads popping up :. found in 8 reviews
I liked this App but it needs full access to Phone. found in 1 reviews
Bar code app works ok but ads not wanted. found in 3 reviews
This app works but has annoying full screen ads that display after scanning. found in 9 reviews
Difficult to scan with a full screen ad in the way. found in 9 reviews
This app redirect my connection to ads every time I scan a barcode. found in 22 reviews
Too many pop up ads and once I scan a QR code. found in 11 reviews
Doesn't scan QR codes and keeps losing focus on the camera. found in 11 reviews
Can't scan anything with those popping up all the time. found in 63 reviews
Can't read barcode. found in 12 reviews
I try to scan something and it won't work. found in 33 reviews
After 5 min trying to scan bar codes quickly uninstalled. found in 19 reviews
Full screen ads and constant requests to rate on Google play. found in 24 reviews
they r saying your camera have problem need to restart. found in 8 reviews
I would pay to get rid of the annoying ads. found in 17 reviews
Ads ads ads ads all the time. found in 8 reviews
The web search is BS and you cant find anything. found in 17 reviews
These stupid pop Ups make it impossible to scan anything. found in 61 reviews
Bottom line is "Your App Sucks ". found in 12 reviews
Too many pop up ads and hard to get a scan. found in 13 reviews
Close it and camera again tries to focus and then again. found in 17 reviews
The QR Code Scan & Barcode Scanner is now available as a free download on Google Play for Android owners. The application is designed for use in English language. It weighs in at only 10MB to download. The new QR Code Scan & Barcode Scanner app version 3.0 has been updated on 2014-01-30. The Apple Store includes a very useful feature that will check if your device and iOS version are both compatible with the app. Most iPhone and iPad are compatible. Here is the app`s compatibility information: 2.2 and up
More Info: Find more info about QR Code Scan & Barcode Scanner in pickwick santa`s Official Website : mailto:pickwick.santa@gmail.com 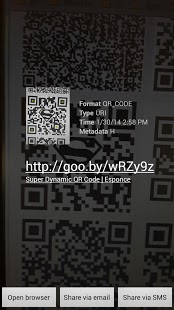 This app is popular with:
shoppersstudents